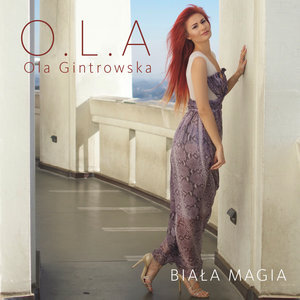 “Biała magia” is the first single in Polish by Ola Gintrowska. The singer, who debuted in the autumn 2015, finally let herself be convinced to record a song in Polish. She wrote the lyrics in co-operation with Błażej Domański and used the music of Robert Janson, a reliable composer and the author of her first hit.  Since this week, the latest video clip of the artist is available on YouTube.

Written together with Domański and Janson, a poetical and lyrical “Biała magia” is a completely different work when compared to the existing Ola’s repertoire; it demonstrates her excellent vocal technique and unique timbre, as well as its capabilities.

The first single in Polish by Ola Gintrowska is about faith that the ideal dream partner exists. The video clip was recorded by the artist herself and her loved ones according to her idea and scenario. “In my previous video clips there were always engaged a professional staff, best cameras and super directors, as for instance Sasha Samsonova at “Best that I’ve felt.” In the case of “Biała magia” it was different - I was the one to handle the direction and the entire idea, while behind the camera, to be more specific a GoPro camera, there stood members of my family and friends,” explains Ola.

In the clip, we can only guess the presence of a man - the main character of the lyrics; he is the camera operator, who in a fairy-tale holiday setting records some scenes from their joint trip. In a snowy winter day, sitting alone with a cup of hot tea in front of a computer, his beloved one recollects the summer and wonderful moments spent together. “I believe that many girls, women, could recognize themselves in this story,” says Ola.

Ola, who debuted in Poland with a song “Missing” and participated in the Polish national selection for the 2016 Eurovision Song Contest, since the beginning of the last year has consistently developed her career in the USA. She was the only Pole at this year’s Grammy Awards, she also appeared at the Billboard Music Awards. Last summer witnessed the premiere of her first dance hit “Best That I’ve Felt” while just before the carnival another club hit called “Rowdy” was released. In the USA, Ola records as O.L.A.

The singer had graduated from an opera singing department, then she studied drama at Kingston University in London. She has performed, among others, in musical and burlesque shows in London, as well as on galas and concerts, where she presented works from classical repertoire.  At the beginning of December, she took part in a concert “Gintrowski—a jednak coś po nas zostanie” dedicated to the memory of Przemysław Gintrowski, her close relative, where she sang a moving “Przesłuchanie anioła” and a lyrical “Powrót”.

Ola does not avoid the big screen - she performed among others in a drama by Barbara Sass “W imieniu diabła” she also appeared in the latest production by Jan Kidawa-Błoński “Gwiazdy”, the premiere of which has been announced for the first half of this year.

Podobne komunikaty
RedDeer.Games opens an office in Barcelona. This is one of the emission targets of the Pre-A private investment round. The financial roadshow will continue until May 15, 2022.
Two new titles in the RedDeerGames portfolio
NASA Endeavor STS-49 space mission chief becomes an advisor and investor in RedDeerGames
"Little Mouse's Encyclopedia", on Nintendo Switch, Xbox One and Xbox Series S | X available from April 23, 2021. Pre-sale has just started.
PMPG Polish Media S.A. announces establishment of a company in Switzerland and changes in the Management Board. Katarzyna Gintrowska – appointed a President of the Board of PMPG Polskie Media S.A. Ilona Weiss – appointed a Chairman of the Board, CEO of B-8 International AG
„Little Mouse's Encyclopedia” coming soon on Nintendo Switch, Xbox One and Xbox Series S|X
Statement by the Group #TomekMackiewicz43
Polish Investment Zone: A new dimension in the economic relations between Poland and the USA- The first Polish –American Leadership Summit – Miami February 2018
Better-than-Forecast Performance – PMPG Polskie Media Summarises Its Successful FY 2016
Inne wersje: txt pdf