Polish Investment Zone: A new dimension in the economic relations between Poland and the USA- The first Polish –American Leadership Summit – Miami February 2018 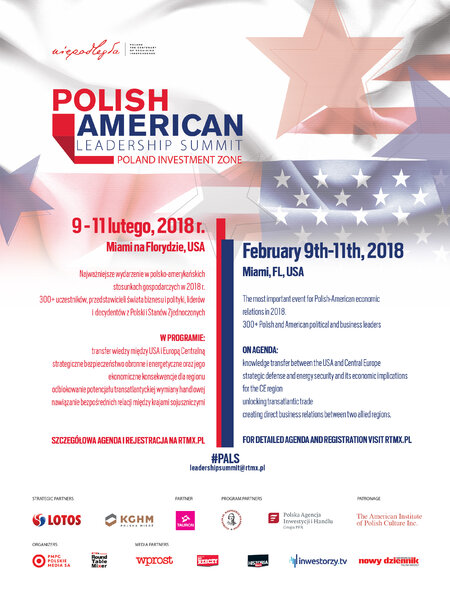 This will be an unprecedented event. Over three days, 300 members of the forum and a total of 450 guests attending adjoining events will be assembled; representatives of big business and politics, leaders and policy-makers from Poland and the United States. From February 9th to 11th (with departure from Warsaw on February 8th to Miami) the Polish – American Leadership Summit: Polish Investment Zone (#PALS) will be inaugurated.

It will be a pivotal event in Polish-American economic relations in 2018 and the first initiative of its kind – conjoining economic and political relations between the two countries.

Among invited and expected distinguished guests of #PALS are the Polish Prime Minister Mateusz Morawiecki, Vice Marshal of the Senate Adam Bielan, Senator Anna Maria Anders, the founder and president of American Institute of Polish Culture Lady Blanka A. Rosenstiel, the Polish Ambassador to the United States Piotr Wilczek and Paweł Borys, the Prresident of the Polish Development Fund, as well as representatives of the Polish Ministries of Development and National Defense. On the American side representatives of the administration of the President of the United States have been invited as well.

“The idea behind this business meeting is to create strong support at the highest level of business and policy making – the level where meaningful political declarations can be made, as they have often appeared in the past and have been historically borne out in relations between Poland and the United States of America. We are inspired by the positive energy accompanying the celebration of 100 years of Polish independence. This independence, as well as Polish history, was uniquely and substantially influenced by individuals such as US presidents Woodrow Wilson, Herbert Hoover and Ronald Regan and their relations with Polish leaders as Prime Minister Ignacy Jan Paderewski and Pope John Paul II. The first Polish-American Leadership Summit will continue this amazing history.” – says Michał Maciej Lisiecki, president of the Program Board and the Summit Organization Committee.

Lisiecki emphasizes how important the format of the meeting is as it will facilitate the creation of direct relations between representatives of the Polish and American contingents. This opportunity will be catalyzed by the RTMx (Round Table Mixer) format, which has been oft-implemented during Polish round table meetings. He also emphasizes that the first summit will have a focus on the idea of the Three Seas Initiative, which looks to be a big factor in future European stability.

The program of the #PALS conference includes, among others, opening VIP statements, 9 sessions in business mixer format, 2 plenary sessions, 3 evening sessions, an awards gala, as well as an exclusive VIP meeting and additional attractions.

The program of the conference is thematically built around topics connected with knowledge and technology transfer between USA and Central Europe, as well as strategic energy security and its positive effect in sustainably stabilizing the region.

The crowning of the official part of #PALS will be the 46th edition of the annual International Polonaise Ball at Eden Roc entitled “100 years of Poland’s Independence and Centuries of Polish – American Relations.”

A concluding special exclusive VIP session of the Summit will take place at Mar-a-Lago, referred to by Donald Trump as the “Winter White House.” The President of the United States has received an invitation to this part of the summit.

Strategic partners of the Polish-American Leadership Summit: Polish Investment Zone are LOTOS group and KGHM Polska Miedź. The event partner is TAURON. Program and content-related partners of #PALS are the Casimir Pulaski Foundation and the Polish Investment and Trade Agency (PFR Group). This event is organized under the auspice of The American Institute of Polish Culture. Media patronage for the conference is provided by the “Wprost” and “Do Rzeczy” weeklies, “Historia Do Rzeczy” monthly, television station Inwestorzy.tv as well as Polish American newsweekly “Nowy Dziennik.” The event organizers are PMPG Polskie Media, Round Table Mixer (RTMx) and the European Centre for Innovative Public Ideas.

Details of the event and information concerning attending the conference are available at the website: https://rtmx.pl/polish-american-leadership-summit.

Podobne komunikaty
RedDeer.Games opens an office in Barcelona. This is one of the emission targets of the Pre-A private investment round. The financial roadshow will continue until May 15, 2022.
Two new titles in the RedDeerGames portfolio
NASA Endeavor STS-49 space mission chief becomes an advisor and investor in RedDeerGames
"Little Mouse's Encyclopedia", on Nintendo Switch, Xbox One and Xbox Series S | X available from April 23, 2021. Pre-sale has just started.
PMPG Polish Media S.A. announces establishment of a company in Switzerland and changes in the Management Board. Katarzyna Gintrowska – appointed a President of the Board of PMPG Polskie Media S.A. Ilona Weiss – appointed a Chairman of the Board, CEO of B-8 International AG
„Little Mouse's Encyclopedia” coming soon on Nintendo Switch, Xbox One and Xbox Series S|X
Statement by the Group #TomekMackiewicz43
Better-than-Forecast Performance – PMPG Polskie Media Summarises Its Successful FY 2016
“Biała magia”- the first single in Polish and a holiday video clip by Ola Gintrowska
Inne wersje: txt pdf