Georgette Mosbacher, US Ambassador to Poland named Person of the 2019 Year by Wprost. 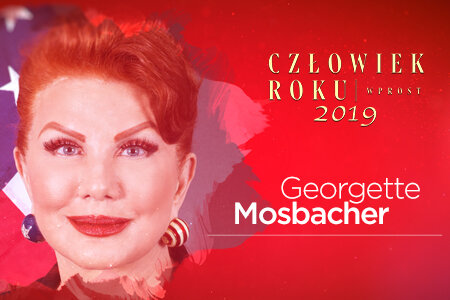 For successfully completing the historical visa waiver for Poles and abolishment of the last relic of the Cold War," the editors of the weekly "Wprost" awarded the title of Person of the Year 2019 to the United States Ambassador to Poland Georgette Mosbacher.

On a symbolic day, November 11th, 2019, the first Poles could, after many years, benefit from visa-free travel to the United States. President Andrzej Duda, announcing this breakthrough moment, emphasized the special role played in this process by the US Ambassador in Warsaw, Georgette Mosbacher. Rafał Milczarski, the CEO of LOT, also spoke about the merits of the ambassador ... - I am deeply convinced that without such a friend we have in Georgette, this action would not have succeeded and we would not have this huge success - emphasized Milczarski.

The Ambassador herself, just after taking over the branch in Poland in 2018, announced that the introduction of visa-free travel for Poles would be her main priority. A year later she could announce success. An outstanding Polish Americanist prof. Zbigniew Lewicki said that this success will have many fathers. "But it really has one author - it is the ambassador who made it a point of honor."

"The winner of this year's title has dreamed, despite the difficulties. She lost her father early, so she had to start working for her livelihood and education very quickly. She herself claims that the optimism of her mother, who did not give up after the death of her husband, remaining with four children, shaped her will and influenced the determination for success even in the most difficult circumstances. Winner of the Person of the Year Award 2019 as the first in the family graduated from university. As the first - she took up business – successfully. As the first woman in US history, she also became the president of the association of republican governors. Today she is also the first woman in history to be the US ambassador to Poland”- wrote in laudation editor-in-chief of the weekly “Wprost” Marcin Dzierżanowski.

The ceremony of giving the title of Wprost Person of the Year took place on March 12th at the Amber Room restaurant in Warsaw.

The editorial board of Wprost has awarded the Person of the Year title since 1991. This is one of the most prestigious awards in Poland. It is received by people who had the greatest impact on the lives of Poles in the past year. Previous winners include, among others: prof. Leszek Balcerowicz, Lech Wałęsa, Wisława Szymborska, Jarosław Kaczyński, Donald Tusk and Angela Merkel. https://czlowiekroku.wprost.pl