Robert Feluś is appointed the editor-in-chief of "Wprost". 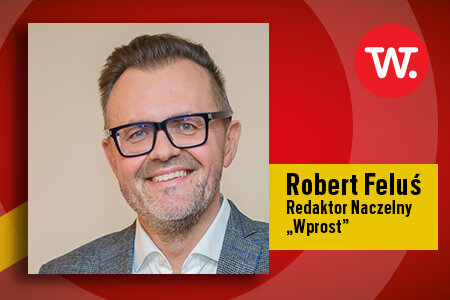 From January 1st, 2021, Robert Feluś will lead the editorial staff of “Wprost”. He will be responsible for all editors of wprost.pl website, including the editorial office of “Wprost” Premium, which prepares the paid and weekly content of "e-Wprost".

- I am delighted with the entrusted mission of running the editorial office of "Wprost" and developing one of the most important media brands in Poland at such a key moment of the intense digital transformation. - says Feluś and adds - The main goal that I set for myself and my team is to develop medium based on the values ​​that result from the essence of independent, high-quality journalism - for which "Wprost" has been famous for decades as a leading opinion-forming weekly. I want readers to find these values, consistent with a traditional and respected press brand, in a modern online edition. We will refer to the best press traditions and draw on the rich experience of the portal. Seeing the commitment of the team that I will lead, I am convinced that together we will build and strengthen the position of "Wprost" the web space, because a title with such a story simply deserves it.

Robert Feluś is a graduate of the Jagiellonian University. He gained his journalistic skills in “Dziennik Polski”, “Echo Krakowa” and the Kraków branch of “Super Express”. He participated in building the editorial office of “Fakt”, and in 2014-2018 he was its editor-in-chief.

He also worked in “Forbes” magazine and “Przegląd Sportowy”, and ran the Onet Rano and Newsroom programs. Recently, he was the deputy editor-in-chief of Wirtualna Polska and the editor-in-chief of the WP SportoweFakty website. He is a lecturer at the SWPS University. He conducts classes with journalism students.

- Congratulations to Robert for his new role. In the recruitment process for the position of editor-in-chief, we had the opportunity to meet many very interesting and experienced candidates. Thank you very much for your accession and fantastic talks. We chose a journalist, editor-in-chief, whose career path and the experience gained guarantee the achievement of the goal of further dynamic development of the "Wprost" brand and making the wprost.pl website a modern digital medium with great potential and power to attract users and subscribers - says Andrzej Chmiel, President of the Management Board AWR Wprost.

- I am glad that "Wprost" is gaining in the person of Robert Feluś not only an experienced journalist and editor who understands the mission of the media, but also a manager who will give a new development impulse to the brand in its digital transformation. "Wprost" is a title with a history.  Today we start writing its new chapter. I wish the new Editor-in-Chief every success in implementing his ambitious plans. - adds Michał M. Lisiecki, the founder and main shareholder of PMPG Polskie Media S.A. to which AWR "Wprost" belongs.

"Wprost" has been one of the most important opinion-forming media for years. Among the weeklies and biweekly magazines, it’s been usually among the top three. Wprost.pl with 7.4 million users (RU) (average for the last quarter) has 23% reach and is the clear leader in the category of websites related to opinion weeklies. (from Gemius / PBI, September-November 2020).