Ilona Weiss has been appointed the President of the Management Board of PMPG Polskie Media S.A. 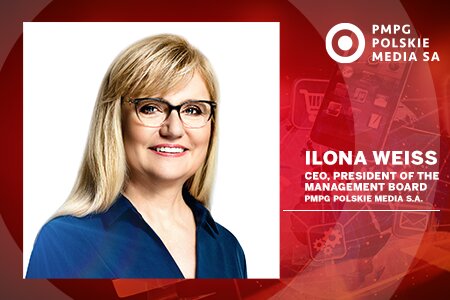 Since the beginning of the COVID-19 pandemic, digital transformation has become a way of staying on the market not only for companies but also entire industries. For our company, the situation turned out to be an incentive to significantly accelerate the digitization process.

The decision of the Supervisory Board to appoint Mrs. Ilona Weiss as the President of the Management Board is related to the strategy adopted at the beginning of the year, aimed at the digital transformation of the PMPG Polskie Media Group.

Much like many other companies that have taken up a similar challenge during the pandemic, we are still at the beginning of the process. We need to implement innovative (intelligent) technologies and business solutions. Realizing that the competitiveness of enterprises today lies in the area of efficiently operating IT systems, we invited an experienced technological partner to cooperation. With the person of the new President of the Management Board, we gain digital experience which will strengthen our brand by integrating innovative technologies and services, which will lead to working out a competitive advantage, operational efficiency and, consequently, recognition of our company and brands around the world.

“Change is happening now - under the influence of digitization, the media market is at a turning point. I'm happy that I will be able to lead a holding company, operating on both the traditional and new media market, through the process of technological change and the challenges of the digital age as the Group CEO and President of the Board of PMPG Polskie Media S.A. Today, media companies are becoming technology companies. While publications are produced in a traditional form, there has been a radical change in the model of press distribution - it will become fully digital in the upcoming years and a key to the way the reader interacts with the content. - I'm joining the PMPG team, a company that is boldly and firmly focused on digital transformation. In my opinion, its additional advantages are the transparency as an entity listed on the Warsaw Stock Exchange, the strength of owned brands and the quality of the content created with the right strategy, make it even more attractive as a company in the eyes of the future investors and shareholders.” - says Ilona Weiss.

“The new President of the Management Board has held high management positions in companies for the last 30 years. She is an entrepreneurial and results-oriented leader, with a business sense and the ability to transform activities and drive growth in a variety of markets, as shown by the multiple successful projects. I found out about it personally, while working together with Stanford University and UPTC in California. For several months, Ilona Weiss has been cooperating with the PMPG Team as a consultant, actively participating in the company's digital transformation. The world has become fast and digital today, so I'm glad that we can jointly learn from Ilona Weiss's international experience in our structures from now on as the President of the Management Board. Her competences, which she gained by working with technology leaders in Europe, the USA and Asia, are key to expand our company's ranges through new, innovative distribution channels and partnerships, as well as building our position and global ambitions. I am looking forward to working on the development initiatives with such an experienced manager, in whom I will have support.” - comments Michał M. Lisiecki, Founder and the majority shareholder of the company.

She started her professional career in 1992 at Bank Handlowy in Warsaw. In 1993–1996, she worked in Telekomunikacja Polska SA, where she co-created development and investment plans. From 1996 to 2006, she held managerial positions in the finance department of the Alcatel group. Following the global Alcatel-Lucent merger in 2006, she took the position of a financial manager responsible for the post-merge of financial reporting integration in Poland and consolidation. As Financial Director at Sage (2008-2010), she was responsible for financial strategy in Poland. She was the Group CFO and Vice President of the Management Board in Sygnity S.A. in 2010–2012. She was the Chairperson of the Supervisory Board of Sygnity Europe Ltd. (2012) Vice-Chairman of the Supervisory Board of Max Elektronik S.A. (2010–2012), a Member of the Supervisory Boards of the companies: Winuel S.A. (2010), PB Polsoft Ltd. (2010–2011), Sygnity Technology sp. z.o.o. (2010–2011) and MCI Capital TFI S.A. (2013-2019). She was an Investment Partner in the MCI Capital Group (2012–2014).

In 2012-2014, Ilona Weiss served as the Group COO and CFO and Vice-President of the management board of the ABC Data Group. In 2015-2016, she acted as the President of the Management Board at ABC Data Germany, and in the years 2015–2019, she was the Group CEO and the President of the Management Board of ABC Data Group. Under her leadership, the ABC Data Group has grown to become a leader in the distribution of IT hardware in Central and Eastern Europe. In 2016, it generated the highest revenues in the entire IT sector in Poland, together with the highest IT hardware sales value (according to the ITwiz Best 100 report). In 2016, the company expanded its business proposition to include VAD services (Value Added Distributor). In the same year, it became the first official distributor of Xiaomi in the European Union. In the following year, it launched its own ABC Data Cloud platform, offering advanced IT services based on a cloud model, and in 2018 it became the exclusive distributor of Alibaba Cloud solutions in Europe.

Ilona Weiss is a graduate of the Faculty of Economics and Management at the Nicolaus Copernicus University in Toruń, specializing in Financial Management. She also has the international ACCA financial qualifications (Association of Chartered Certified Accountants). In 2010-2013, she was the President of ACCA Poland, and she was a Member of the Corporate Reporting Global Forum. She also certified from the Executive Program at the MIT Sloan School of Management in Artificial Intelligence Applications, at Harvard University in the field of Cybersecurity, and Harvard Business School in the field of Disruptive Strategies.

Since 2003, Ilona Weiss has been a Member of the international organization ACCA, GTDC (Global Technology Distribution Council) - an organization representing leading IT distributors (2015-2019), and a member of YPO (Young Presidents Organization), a network of CEOs with 27,000 members in over 130 countries (as of 2018) and as of 2019 - Business Center Club. She was a speaker at industry conferences: GTDC Investor Summit (Wall Street, Nowy York, 2015), GTDC Summit EMEA (Vienna, 2017), Global Women's Leadership Summit (Tokyo, 2017 and Sydney, 2018), Grow Your Business with the Best (Warsaw, 2017) and Technology Symposium (Stanford University, 2018 and 2019)

A holding company operating in the traditional and new media market. The Group includes, among others: the Agency Publishing and Advertising Wprost, publisher of wprost.pl, e-weekly "Wprost" and the company Orle Pióro, publisher of dorzeczy.pl, the weekly "Do Rzeczy" and the magazine "Historia Do Rzeczy".Current information on the activities of the PMPG Capital Group can be found on the company's website, as well as on its profiles on Facebook and Twitter.

Due to the constantly growing number of users belonging to websites of the Group, mainly wprost.pl and dorzeczy.pl, PMPG joined the Top 20 Internet publishers in Poland in spring 2020. With 9.4 million users (RU), PMPG is a clear leader in the category of websites related to opinion weeklies, with a 70% total share. The wprost.pl website itself, No. 1 in this category, achieved over 24% coverage among all Polish Internet users, while dorzeczy.pl 15.5%. (Gemius / PBI, November 2020).