The PMPG Polish Media Group has signed a letter of intent with world leaders in new technologies. 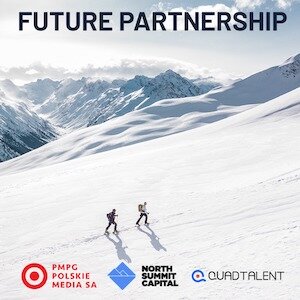 The purpose of establishing cooperation between the three companies is to strengthen and accelerate the digital transformation of the PMPG Group, including the creation of innovative business models and digital platforms based on artificial intelligence engine with the goal to build a unique and lasting competitive advantage in Europe.

The founder of both North Summit Capital and Quadtalent Technology is Dr. Wanli Min,  former Chief Machine Intelligence Scientist in Alibaba Cloud. Dr Min was the success behind 100+ projects related to smart city, enterprise and industry digital transformation. Prior to Alibaba he worked at the IBM J.T. Watson Research Center and Google.

Shenzhen-based North Summit Capital is an investment fund with up to $1B of dry powder available for deployment. Quadtalent is an A.I. and data technology company that employs 160 top-class experts in the field of artificial intelligence and has access to 280,000 of such professionals. It is ranked among the top technology companies in Asia and has a rich portfolio of completed projects. Quadtalent has been recently awarded as one of the top 10 A.I. companies in China.

North Summit Capital cooperates with Quadtalent supporting the innovative development framework of Digital Venture Builder in the “tech + capital” model.  Thus, in the first step it provides technology to the project, and considerations for capital at the later stage.

“The media market, companies in this sector, are increasingly becoming technology-based companies. Hence our choice of a strategic partner who gives not only capital, but also, and perhaps above all, access to the most advanced technologies in the world. The PMPG development strategy will be created and implemented based on these new technologies. " - said Ilona Weiss, CEO and President of the Management Board of PMPG Polish Media Group and Venture Partner of North Summit Capital, after signing the Letter Of Intent.

“We have been looking for a partner for a long time.  We were looking for a partner whom with PMPG could make a jump to the 21st century. We keep a close eye on what is happening in the world and how technology is transforming traditional segments. Today we are establishing cooperation with companies that will not only bring state of the art technological know-how, but also understand the problems which companies such as ours face during transformation. The Digital Venture Builder model in which our partners work is considered to be the most effective in managing innovation and creating revolutionary solutions. In the near future, PMPG will make efforts to obtain the capital necessary to finance our development plans and implementation of the technology provided by Quandtalent. North Summit Capital will support the company at the later stage of product implementation in the market”- explained Michał M. Lisiecki, founder and majority shareholder of PMPG.

“A.I. – Accessible, Affordable and Actionable Intelligence is key for digital transformation. Every company in the future should be a technology infused company. We are looking forward for a successful collaboration with PMPG Media Group” – explained Dr Wanli Min, Founder and CEO of North Summit Capital and Quadtalent Technology.

Founder and CEO of North Summit Capital (NSC) and Quadtalent Technology (QT). Named by Forbes as ‘One of China’s AI Leaders’ in 2017. He graduated the Special Class for Gifted Youth (SCGY）program from the University of Science and Technology of China in 1997 at the age of 19, after which he received Ph.D. in Statistics from University of Chicago in 2004. Since then, he has worked in IBM T.J. Waston Research Centre, IBM Singapore and Google, before joining Alibaba, where he served as the Chief Machine Intelligence Scientist in Alibaba Cloud. During his time there, he led cloud and data technology innovation and commercialisation spanning over 100 projects and 8 industries. Distilled from those efforts by his team, industrial intelligence product "ET Brain" has won the "World Internet Leading Technology Achievement Award" at the 2017 and 2018 World Internet Conference. In 2018, he was selected as Forrester's nine global digital transformation experts (the first Chinese firm).  In 2019 he founded NSC and QT to turbocharge technology injection and intelligence revolution of traditional industries globally under the innovative ‘tech + capital’ model.

The digital transformation solutions provider,  was founded to spearhead the penetration of data and digital technology into traditional industries.  Since 2015, QT’s core team had successfully delivered over 100 digital transformation projects across 8 industries, helping clients generate several hundred millions of USD in revenue, through which the team perfected the value magnifying model for industries and cutting-edge technologies to enhance one another.  Not only did the pioneering efforts blazed the new trail for traditional industries to derive new value from data, it also redefined the future of Cloud Computing to one where data and intelligence takes the center stage. [about]

Investment fund founded with a new investing philosophy of technology consulting plus financial investment.  It aims to attain the vision of advancing inclusive technology for social good, through accelerating digital transformation of the traditional industries and combining A.I. intelligence with traditional sectors, specifically in manufacturing, agriculture, healthcare, media etc. [about]

Founder, majority shareholder and supervisory board member of PMPG Polskie Media SA [GPW: PGM]. He is Polish serial entrepreneur, publisher, manager, media and marketing communication expert. Investing in companies as angel investor and VC partner. Has 20 years of experience in establishing businesses both at early development phases and at the stage of procuring funds for continued growth. His core activity focuses on development of independent media.

CEO and President of Management Board of PMPG Polskie Media SA [GPW:PGM] and Venture Partner of North Summit Capital. She is a visionary strategist, digitally savvy and exponential growth leader. Innovator and creator of new business models. She has 25+ years of professional experience in ICT. Before joining PMPG Polskie Media Group she served as CEO and President of Management Board of ABC Data and as Board Member of MCI Capital TFI. She cooperated with the biggest global technological companies like Apple, Microsoft, Amazon, Alibaba, Dell, HP, Huawei, Lenovo, Xiaomi, Cisco, Intel, Panasonic, Sony, Xerox and 30+ more. She disrupted the mobile market in Europe by developing European market entry strategy for Xiaomi.

Ilona Weiss is a graduate of the Faculty of Economics and management at the Nicolaus Copernicus University in Toruń, specializing in Financial Management. She also has international ACCA (Association of Chartered Certified Accountants) financial qualifications. In 2010-2013 she was the President of ACCA Poland, and she was a Member of the Corporate Reporting Global Forum. She has certificates from the Executive Program at the MIT Sloan School of Management in Artificial Intelligence Applications, Harvard University in the field of Cybersecurity and Harvard Business School in the field of Disruptive Strategies. Since 2018, Ilona Weiss is a YPO (Young Presidents Organization) Member.

A holding company operating on the traditional and new media market. The Group includes, among others: Agencja Wydawniczo-Reklamowa Wprost, publisher of wprost.pl and the e-weekly "Wprost" and the company Orle Pióro, publisher of dorzeczy.pl the weekly "Do Rzeczy" and the "Historia Do Rzeczy" magazine. Up-to-date information on the activities of the PMPG Capital Group can be found on the company's website, as well as on its profiles on Facebook and Twitter.