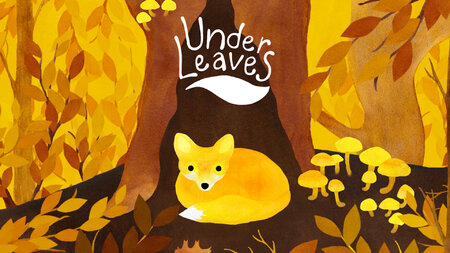 Great "Under Leaves" since yesterday on Nintendo Switch!

This time RedDeerGames, the global publisher of the game "Under Leaves", in cooperation with Circus Atos, will take players for a relaxing trip around the world to connect them with nature and to spend time talking to the animals in a wonderful hand-painted setting.

“Under Leaves” is a colorful hidden object game from the animal world. Beautiful hand-drawn watercolors and a soothing soundscape create a delicately exotic experience. The game runs through nine different locations around the world. During their journey, players will find themselves in the land of ice, steamy jungle, and even dive underwater. All nature lovers will be charmed by twenty-nine animated animals from around the world: a polar bear, a large-eyed owl, a turtle, or a parrot that needs help.

The most important features of the game are:

The relaxing and text-free game "Under Leaves" is available for everyone on the following platforms:

More about „Under Leaves”:

RedDeerGames (RDG) is an independent development studio, present on the gaming market only from the fourth Q4 2018. The company is a producer and publisher of low-budget and high-margin proprietary games and titles from other manufacturers sold worldwide in the digital distribution model, via dedicated platforms, in particular STEAM, Nintendo eShop, and Microsoft Store, which are the largest game distributors and applications in the world.

Circus Atos is a small, independent game studio based in Prague. They passionately create authentic and imaginative games such as Ahoooj or LittleMousesEncyclopedia.

A holding company operating in the traditional and new media market. The Group includes, among others: Wprost Publishing and Advertising Agency, publisher of the weekly "Wprost" and the Orle Pióro company, publisher of the weekly "Do Rzeczy" and the "Historia Do Rzeczy" magazine. Current information about the PMPG Capital Group's activities can be found on the company's website and its profiles on Facebook, Linkedin and Twitter.