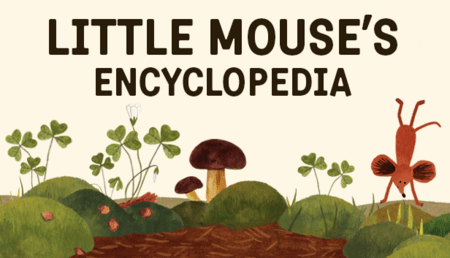 After the success of the great game „Under Leaves”, Circus Atos and RedDeerGames (a portfolio company of PMPG S.A.) joined forces once again to publish a hand-illustrated, interactive encyclopedia of plants and animals, „Little Mouse's Encyclopedia”.

The creators have prepared an interesting journey for their fans combined with educational elements, allowing users of Xbox One, Xbox Series X|S, and Nintendo Switch to discover the wonderful world of nature with over 160 species of plants and animals. The plot of the game is perfect for born explorers. While wandering around the world, hearing relaxing music with nature's sounds in the background, the player finds all the animals and plants himself. Using a magnifying glass he can reveal information sheets with interesting facts and drawings about them.

"Little Mouse's Encyclopedia" will appear on Nintendo Switch, Xbox One, and Xbox Series X|S later this year and will be available in eighteen languages.

The most important game features:

RedDeerGames (RDG) is an independent development studio, present on the gaming market only from the fourth quarter of 2018. The company is a producer and publisher of low-budget and high-margin proprietary games and titles from other producers sold around the world in the digital distribution model via dedicated platforms, in particular STEAM, Nintendo eShop, and Microsoft Store, which are the largest distributors of games and applications in the world.

Circus Atos is a small, independent game studio based in Prague. They passionately create authentic and imaginative games such as “Ahoooj”, “Under Leaves,” or “Little Mouse’s Encyclopedia”.

PMPG Polskie Media S.A. is strongly involved in the process of digital transformation. In cooperation with international partners Quadtalent Europe Limited (a subsidiary of Quadtalent Technology) and North Summit Capital GP Limited, it intends to accelerate the digital transformation of the Capital Group, as well as create innovative business models and technology platforms based on artificial intelligence, the effect of which is to build a unique and sustainable competitive advantage in Europe.

Podobne komunikaty
RedDeer.Games opens an office in Barcelona. This is one of the emission targets of the Pre-A private investment round. The financial roadshow will continue until May 15, 2022.
Two new titles in the RedDeerGames portfolio
NASA Endeavor STS-49 space mission chief becomes an advisor and investor in RedDeerGames
"Little Mouse's Encyclopedia", on Nintendo Switch, Xbox One and Xbox Series S | X available from April 23, 2021. Pre-sale has just started.
PMPG Polish Media S.A. announces establishment of a company in Switzerland and changes in the Management Board. Katarzyna Gintrowska – appointed a President of the Board of PMPG Polskie Media S.A. Ilona Weiss – appointed a Chairman of the Board, CEO of B-8 International AG
Statement by the Group #TomekMackiewicz43
Polish Investment Zone: A new dimension in the economic relations between Poland and the USA- The first Polish –American Leadership Summit – Miami February 2018
Better-than-Forecast Performance – PMPG Polskie Media Summarises Its Successful FY 2016
“Biała magia”- the first single in Polish and a holiday video clip by Ola Gintrowska
Inne wersje: txt pdf