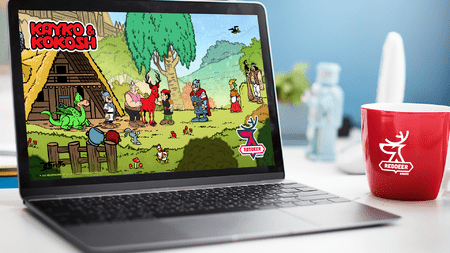 RedDeerGames, a company from the PMPG Polskie Media S.A. investment portfolio, successfully completed a private issue of shares in the seed round, thanks to which it acquired over PLN 1.7 million. The company achieved solid financial results for 2020 and has a strong foundation for further growth.

The management board of RedDeerGames sp. z o.o. informs that as a result of another private seed investment round conducted by the founders of RedDeerGames, the company has completed the roadshow and acquired over a dozen Investors, who jointly acquired 557 new shares. PMPG Polskie Media S.A., a listed company, is also among the investors involved in the capital. (18.73%).

The acquired capital in the amount of PLN 1.7 million will be used to finance current operations, including the development of the offer of gaming projects and strengthening the staff of the team working on them. The valuation of the company in the seed financial round, made using the comparative method, amounted to PLN 19.7 million.

- Investors appreciated the company's rapid growth in the last year and trusted our adopted strategy concerning game production and promotion, which made it possible to successfully complete the second private issue of shares and to obtain capital support for the further development of the company. Professional Investors and private persons appeared in the shareholding structure, not only in terms of the capital but also operationally, which undoubtedly accelerates the company's development. We would like to thank all the existing and new investors for the support and trust you have placed in us. We, on our part, will make every effort to confirm the rightness of the investment decision with our current activities – says Michał M. Lisiecki, CEO and co-founder of RedDeerGames sp. z o.o.

RedDeerGames sums up 2020: solid financial results and the basis for further growth

The greatest effect on the increase in operating profits was due to revenues from the sale of games in the digital distribution model via dedicated platforms: Nintendo eShop, Microsoft Store and Steam.

The year 2020 was dedicated to checking the implemented business model (proof of concept). RedDeerGames maintains and develops affiliate programs with Microsoft (Xbox One), Nintendo Switch, STEAM, and Apple. Billing systems and digital distribution of games, as well as their operation on individual platforms, were tested.

RedDeerGames is developing as planned, although it should be emphasized that the slowdown caused by restrictions related to COVID-19 affected temporary delays in the implementation of the adopted work schedule and game production. Despite the special conditions, the company managed to use the past year to acquire new competencies and acquire very valuable industry know-how, thanks to which it consistently implemented the assumptions of the adopted strategy, including work on original productions as well as acquiring new titles for *porting. Cooperation with industry partners focused on the computer games market is also being developed in the field of barter (and not only) distribution and promotion of own products.

- We are constantly focusing on maintaining a relatively stable level of revenues while controlling costs. All these activities were undoubtedly reflected in positive financial results for the previous financial year. As a team, we have set ourselves very ambitious goals for the development of the company and we will present them at the time of going public. Today the most important of them is building an ambitious and professional team to which we invite talents from the Polish and international gaming sector - adds Michał M. Lisiecki, CEO and co-founder of RedDeerGames sp. z o.o.

*Porting - a service of transferring (implementing) games between individual hardware platforms, is an additional source that increases the margin on the published titles.

RedDeerGames (RDG) is an independent development studio, present on the game market only since the fourth quarter of 2018. The company is a developer, as well as a publisher of indie games of its own and third-party titles sold worldwide in the digital distribution model, through dedicated platforms, in particular the Nintendo eShop, the Microsoft Store, and STEAM, which are the largest distributors of games and applications in the world.

Recent communications of the company:

PMPG Polskie Media S.A. is strongly involved in the process of digital transformation. In cooperation with international partners Quadtalent Europe Limited (a subsidiary of Quadtalent Technology) and North Summit Capital GP Limited, it intends to accelerate the digital transformation of the Capital Group, as well as to create innovative business models and technology platforms based on artificial intelligence, which will result in building a unique and sustainable competitive advantage in Europe.