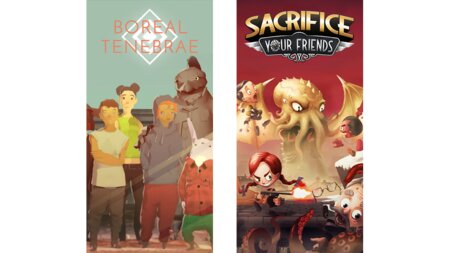 Company RedDeerGames, from the investment portfolio of PMPG Polskie Media S.A., has announced forthcoming releases from its publishing portfolio: "Sacrifice Your Friends" and "Boreal Tenebrae".

The company acquired the license to release "Sacrifice Your Friends" from the Canadian manufacturer Astrolabe Interactive Inc. and in the case of "Boreal Tenebrae" – as a result of cooperation with the studio Snot Bubbles Productions, the producer of the game. Both titles will be available later this year on Nintendo Switch, Xbox One, and Xbox Series S|X.

"Sacrifice Your Friends" is a fast-paced melee combat party game in a cute cartoon horror style. It offers a fresh perspective on the terrifying and dark adventures inspired by the stories of the legendary author H.P. Lovecraft.

Daniel Beaulieu, the creator of "Boreal Tenebrae" takes the player to a dying city in the beautifully stylized world of PS1 and retro adventure games with horror elements. It is worth mentioning that the game was nominated for Best Art Direction and Best Narrative at the 2021 Canadian Game Awards, alongside popular titles such as Ubisoft's "Assassin's Creed Valhalla" and "Spiritfarer" from Thunder Lotus.

American writer, author of horror stories (weird fiction) and fantasy, creator of the Cthulhu mythology. He is one of the forerunners of science fiction, his stories in this convention introduce many of the creatures known from his mythology (commonly referred to as "Lovecraft mythology" or "Cthulhu mythology") – a pantheon of unimaginable otherworldly beings with divine powers. His stories are chiefly set in New England, whose old districts are dominated by derelict Victorian houses. He also created Arkham, a fictional city in Massachusetts, which years later became the inspiration for the name of a psychiatric hospital in Batman comics, among others.

Mentions and references to Lovecraft's works have also appeared in music, e.g. in Metallica's song "The Call of Ktulu", which is an illustration of the short story "The Call of Cthulhu". Numerous references can also be found in computer, board, card, and role-playing (RPG) games. Humorous references to the writer's prose are, meanwhile, made by the writer Jan Plata-Przechlewski in the comics "Wampiurs Wars".

H.P. Lovecraft was a prolific author, whose prose is celebrated all over the world. His popularity has reached an absolute peak in the 21st century. Never before has the master of cosmic horror been read as willingly, criticized with such ferocity, and analyzed in so many ways. His impact on contemporary pop culture cannot be overstated.

Astrolabe Interactive is an independent, innovative game design studio based in Montreal, Canada. With solid experience in programming, 3D art, animation as well as graphic and UX design, not only does the studio create video and board games, it also offers gamification services for business, marketing, and the event industry.

Snot Bubbles Productions is an independent development studio based in Canada. They are passionate about creating unique indie games the likes of "Boreal Tenebrae". They form a dynamic team that has become one of the largest leaders in the indie gaming industry in Quebec.

Artist, animation director, animator, director, editor, screenwriter, camera operator, lighting designer. In 2014, he graduated from Vancouver Film School with a specialization in 3D character animation. His student film "Malaise" was awarded Staff Pick on Vimeo and screened at international film festivals. After graduation, he worked as the main animator on, among others, the Emmy Award-winning Disney series “Elena of Avalor”, “The Rocketeer” and “The Adventures of Puss in Boots”, a production of DreamWorks Animation Television/Netflix.

RedDeerGames (RDG) is an independent development studio, present on the game market only since the fourth quarter of 2018. The company is a developer, as well as a publisher of indie games of its own and third-party titles sold worldwide in the digital distribution model, through dedicated platforms, in particular the Nintendo eShop, the Microsoft Store, and STEAM, which are the largest distributors
of games and applications in the world.

Recent communications of the company:

PMPG Polskie Media S.A. is strongly involved in the process of digital transformation. In cooperation with international partners Quadtalent Europe Limited (a subsidiary of Quadtalent Technology) and North Summit Capital GP Limited, it intends to accelerate the digital transformation of the Capital Group, as well as to create innovative business models and technology platforms based on artificial intelligence, which will result in building a unique and sustainable competitive advantage in Europe.

Podobne komunikaty
NASA Endeavor STS-49 space mission chief becomes an advisor and investor in RedDeerGames
"Little Mouse's Encyclopedia", on Nintendo Switch, Xbox One and Xbox Series S | X available from April 23, 2021. Pre-sale has just started.
PMPG Polish Media S.A. announces establishment of a company in Switzerland and changes in the Management Board. Katarzyna Gintrowska – appointed a President of the Board of PMPG Polskie Media S.A. Ilona Weiss – appointed a Chairman of the Board, CEO of B-8 International AG
„Little Mouse's Encyclopedia” coming soon on Nintendo Switch, Xbox One and Xbox Series S|X
Statement by the Group #TomekMackiewicz43
Polish Investment Zone: A new dimension in the economic relations between Poland and the USA- The first Polish –American Leadership Summit – Miami February 2018
Better-than-Forecast Performance – PMPG Polskie Media Summarises Its Successful FY 2016
“Biała magia”- the first single in Polish and a holiday video clip by Ola Gintrowska