RedDeer.Games opens an office in Barcelona. This is one of the emission targets of the Pre-A private investment round. The financial roadshow will continue until May 15, 2022. 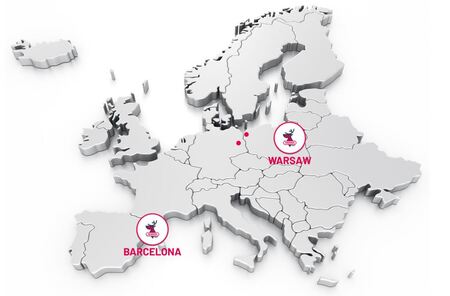 OPENING OF AN OPERATING OFFICE IN BARCELONA | MAY 2022

Due to the dynamic development of RedDeer.Games, the management board, in consultation with the board of directors, took steps to accelerate the implementation of the company's development strategy, extending the current operational activities of the studio in Poland (Szczecin, Warsaw) with an additional headquarters in Spain (Barcelona). An internal analysis of the costs related to the functioning of the studio in Barcelona showed a comparable level to the costs of maintaining the headquarters in Warsaw.

"Our ambition is to become one of the best console game development teams. To achieve this and develop in Europe, in addition to our operational studio in Warsaw, we are opening in May this year another one in Barcelona. We are in the process of an investment roadshow, we will use some of the funds obtained from the Pre-A round on the new studio launch and development."- comments Michał M. Lisiecki, CEO, and co-founder of RedDeer.Games sp. z o.o. "Taking the optimistic variant of stabilization in the region, the Warsaw office will become a job HUB for Poles and Ukrainians, and the new studio in Barcelona will be the headquarters that will allow us to acquire new international talents. At the moment, our team is enriched by specialists from Korea, Turkey, Macedonia, Italy, and Spain"- he adds.

REDDEER.GAMES SOLID FINANCIAL RESULTS FOR 2021 AND THE FOUNDATION FOR FURTHER GROWTH

The most significant impact on the increase in operating profit was due to revenues from the sale of games (from our constantly growing portfolio) in the digital distribution model via the platforms: Nintendo eShop, Microsoft Store, and Steam.

The company used the past year to acquire new competencies and acquire precious industry know-how. It consistently implemented the assumptions of the adopted strategy, including, among other things, working on original productions and earning new porting titles. We also develop cooperation with industry partners focused around the computer games market in the distribution and promotion of own products.

"We are constantly focusing on maintaining revenue growth dynamics while firmly controlling costs. All these activities were undoubtedly reflected in the positive financial results for the past financial year. As founders, we have set ourselves very ambitious development goals. Today, the most important one is building an ambitious and professional team to which we invite talents from the Polish and international gaming sector" - adds Michał M. Lisiecki, CEO, and co-founder of RedDeer.Games.

The chosen by ReadDeer.Games game production segments, which are publishing and porting, have proved their worth. We intend to continue the adopted business model, expand it, among other things, for the NFT department, acquire competencies in the production of AA | AA + games, and open and develop an operating office in Barcelona. We are preparing to obtain funds for this purpose from the next private investment round Pre-A. We are running a series of meetings with Investors as part of the roadshow until the end of March this year in Warsaw, Berlin, and Madrid.

RedDeer.Games (RDG) is an independent development studio, present on the gaming market since 2018. The company is a producer and publisher of own indie games and titles from other producers sold around the world in the digital distribution model, via dedicated platforms, in particular Nintendo eShop, Microsoft Store, and STEAM, which are the largest distributors of games and applications in the world.

Combining the expertise of a team of passionate designers, artists, musicians, programmers, and producers, RDG creates fun and addictive indie games. Teaser of games released in the period 2019-2021 available at this link: VIDEO. Currently, the company's portfolio includes nearly 100 contracted titles, all announcements, and games released by RedDeer.Games are available HERE.

The year 2022 is a breakthrough for RDG - at the beginning of the year, a company within its own structure established a dedicated department that will be responsible for the implementation of NFT tokens for titles issued by the studio. Additionally, after two years of operating activity in the indie segment, it plans to expand its competencies in the field of AA | AA+ category game production.

Podobne komunikaty
RedDeer.Games with the award "The fastest growing gamedev company in Central Europe" starts the investment roadshow
Two new titles in the RedDeerGames portfolio
NASA Endeavor STS-49 space mission chief becomes an advisor and investor in RedDeerGames
"Little Mouse's Encyclopedia", on Nintendo Switch, Xbox One and Xbox Series S | X available from April 23, 2021. Pre-sale has just started.
PMPG Polish Media S.A. announces establishment of a company in Switzerland and changes in the Management Board. Katarzyna Gintrowska – appointed a President of the Board of PMPG Polskie Media S.A. Ilona Weiss – appointed a Chairman of the Board, CEO of B-8 International AG
„Little Mouse's Encyclopedia” coming soon on Nintendo Switch, Xbox One and Xbox Series S|X
Statement by the Group #TomekMackiewicz43
Polish Investment Zone: A new dimension in the economic relations between Poland and the USA- The first Polish –American Leadership Summit – Miami February 2018
Better-than-Forecast Performance – PMPG Polskie Media Summarises Its Successful FY 2016
“Biała magia”- the first single in Polish and a holiday video clip by Ola Gintrowska