RedDeer.Games debuts in the "TOP 50 game developers in Poland 2022" ranking compiled by the editors of "Forbes" magazine 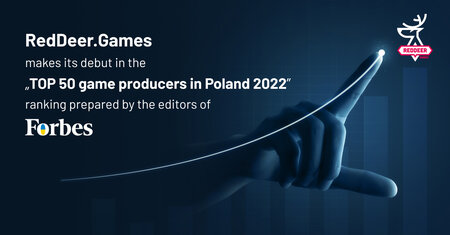 We are delighted to share that our development studio, RedDeer.Games, which has been operating on the games market for only two and a half years, made its debut among the top Polish game developers in the "TOP 50 game developers in Poland 2022" ranking.

This ennobling distinction for our entire Team was announced on 24th May 2022 during the "50 Most Valuable Polish Game Developers" conference organized by "Forbes" magazine, whose content partner was Goldman Sachs.

About the "TOP 50 game developers in Poland 2022" ranking

The ranking, compiled by Forbes Poland journalists Piotr Karnaszewski and Filip Kowalik, ranks a total of 50 (including 33 listed on the Stock Exchange and 17 non-public) significant Polish gaming companies, based on the estimated value of a given enterprise. In this ranking, RedDeer.Games debuted among the leading Polish game developers in 40th place with a valuation of PLN 56 million.

- Valuing private assets was a challenge due to limited access to public information and the inability to account for future profits. However, we decided to provide estimated company valuations to reflect an accurate picture of the industry best, thanks to which we were able to pick out several "game dev gems," explains Paweł Sugalski, CFA and founder of Smart Money FIZ, which assisted "Forbes" in creating the ranking. - Sugalski adds that it is essential to present even estimated data, especially nowadays when private market valuations are better than those on the stock market and more foreign investors are entering Poland.  (Source: Forbes „TOP 50 game producers in Poland 2022”)

Details, including valuation methodology in the article’s content by the authors mentioned above Forbes: "TOP 50 game producers in Poland 2022".

- Our studio’s debut in the above ranking coincided with completing the third Pre-A investment round. The roadshow, which has been running since February this year, has been a real challenge due to the political situation beyond our eastern border. The ongoing war, as well as the exaggeratedly high inflation, have been factors that hampered investment sentiment. Despite the unfavorable circumstances, we successfully completed the third financing round through our own efforts. Thanks to the trust of our investors, we gained PLN 2 million on a valuation of PLN 56 million - says Michał M. Lisiecki, CEO and co-founder of RedDeer.Games.

Anyone interested in investing in RedDeer.Games' next investment round is welcome to contact us today by email (ir@reddeergames.com) or through our dedicated RedDeer.Games Investor Relations profile on LinkedIn. We are planning our next roadshow for the third quarter of this year.

As previously announced, despite the challenging global situation, the ability to adapt to current conditions is fundamental in the startup world. Therefore, in an effort to overcome the deteriorating political situation in Central Europe, the Management Board, in consultation with the Boardof Directors, has taken steps to accelerate the implementation of the company's growth strategy by expanding the current operations of the studio in Poland (Szczecin, Warsaw) with an additional office in Spain (Barcelona) in order to make RedDeerGames more attractive as an employer and obtain the status of an international company.

Assuming an optimistic stabilization scenario in the region, the Warsaw office will become a Job Hub for Poles and Ukrainians. At the same time, the new Barcelona studio will be the headquarters for attracting more international talent. At the moment, our team is enriched by specialists from Korea, Turkey, Macedonia, Italy and Spain.

Forbes (Polska) is the Polish edition of the international biweekly Forbes, published in Poland since 16 December 2004 by Ringier Axel Springer Polska. It is a business monthly aimed primarily at middle and upper management, people in business, dynamic, active people who are open to global trends, as well as investors looking for non-standard possibilities of capital growth through original investment strategies.

Goldman Sachs Group, Inc. is a leading global financial institution that provides a broad range of financial services in investment banking, securities, investment management and consumer banking to a large and diverse client base that includes corporations, financial institutions, governments and individuals. Founded in 1869, the company is headquartered in New York and has offices worldwide in all major financial centers.

RedDeer.Games (RDG) is an independent development studio with operational activities in the games market since the fourth quarter of 2019. The company is a developer and publisher of its own and third-party indie games, sold worldwide in the digital distribution model through dedicated platforms, particularly the Nintendo eShop, Microsoft Store and STEAM, the world’s largest game and app distributors. The company's plans for 2022 include expanding its publishing activities on the PlayStation Store platform.

Combining the expertise of a team of passionate designers, artists, musicians, programmers and producers, RDG creates fun and engaging indie games. Teaser of games released between 2019 and 2021 available at this link: VIDEO. The company currently has nearly 100 contracted titles in its portfolio, all announcements and games released by RedDeer.Games available: HERE.

The company is one of the largest Nintendo Switch game publishers. Our games are regularly featured in the TOP 30 Nintendo Switch eShop sales charts in all regions, as well as in the recently added new "Trending by Play Time" section of the eShop.

The year 2022 marks a breakthrough for the company, which plans to expand its competence in game production in AA | AA+ after two years in the indie segment—details on preparing an AA class project based on the purchased license, 100% owned by RedDeer.Games will be announced soon.