RedDeer.Games with the award "The fastest growing gamedev company in Central Europe" starts the investment roadshow 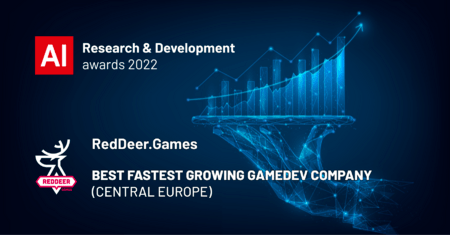 The company RedDeer.Games (RDG), an independent producer and publisher of video games (indie games), in September this year after less than three years of operational activity, has received the Research and Development Awards 2022, awarded by Acquisition International Magazine in the category of the Best Fastest Growing GameDev Company - Central Europe.

In May this year RedDeer.Games made its debut among the leading Polish game producers in the ranking of "Forbes" monthly: "TOP 50 game producers in Poland 2022", taking the 40th place with a valuation of PLN 56 million. The ranking was opened by such recognized companies as CD Projekt, Techland, PlayWay, 11 Bit Studios, or Ten Square Games. RedDeer.Games ranked right behind Incuvo, a company with an established position in the VR market, and Exit Plan Games, a studio created by AAA game enthusiasts.

Due to the dynamic development of the studio, including the publishing portfolio for Premium (IP) and AA licenses, as well as expansion into foreign markets, the company already in October this year starts the roadshow of the Pre-A (II) private investment round. The current round is addressed to Individual Investors and Venture Capital funds. RedDeer.Games will offer interested investors a total of 700 new shares, i.e., 15 percent in its increased share capital.

As a result of the previous investment rounds carried out by the founders of the studio: "F&F", "Seed" and "Pre-A", the company acquired a dozen or so Partners, who jointly acquired 887 shares, i.e., 18.95 percent of its capital. The investment in the company has brought our existing investors an increase in the value of shares at the level of:

The capital obtained from individual investors significantly supported the company's day-to-day operations, the development of the offer of gaming projects, and above all, strengthening the staff of the team working on them, as well as marketing and publishing activities. In a short summary, we present how we used the trust placed in us by operating on the gaming market for nearly three years:

The game production, publishing and porting segments selected by RedDeer.Games have proven themselves. Taking advantage of our well-established position on the global gaming market, we intend to continue the adopted business model, expanding it, among others on the team for initiatives in VR, Metaverse and NFT, obtaining a number of Premium (IP) licenses, as well as the development of competencies in the production of games in the category AA, offering a much higher level of story and entertainment.

The intention of the Management Board is to obtain funds from Investors in the current investment round, which will contribute to the support of the following investments:

ISSUE OBJECTIVES OF THE PRE-A PRIVATE INVESTMENT ROUND (II)

According to the adopted schedule, a series of meetings between the Management Board and Investors, both in Warsaw, and selected European cities, it will last from October this year by the end of March 2023.

— Polish companies that generate revenues mainly in foreign currencies are clearly supported by weakening of the local currency. The attractiveness of the gamedev sector, especially during the economic downturn, seems to be much better than other sectors - especially traditional and cyclical ones that lead to an unequal struggle with commodity prices and accelerating inflation. In addition, most large European companies are still exposed to huge political risk, in particular in the energy and fuel sectors. Despite adverse market conditions, local profitable gaming companies can be the green island of the Polish economy — says Paweł Sugalski, CFA, portfolio manager and founder of Smart Money fund, member of supervisory boards of gamedev companies and author of the book “Gaming on the Stock Exchange”.

Everyone interested in investing in RedDeer.Games, please contact us directly, and we will answer all additional questions regarding the current investment round.

Podobne komunikaty
RedDeer.Games opens an office in Barcelona. This is one of the emission targets of the Pre-A private investment round. The financial roadshow will continue until May 15, 2022.
Two new titles in the RedDeerGames portfolio
NASA Endeavor STS-49 space mission chief becomes an advisor and investor in RedDeerGames
"Little Mouse's Encyclopedia", on Nintendo Switch, Xbox One and Xbox Series S | X available from April 23, 2021. Pre-sale has just started.
PMPG Polish Media S.A. announces establishment of a company in Switzerland and changes in the Management Board. Katarzyna Gintrowska – appointed a President of the Board of PMPG Polskie Media S.A. Ilona Weiss – appointed a Chairman of the Board, CEO of B-8 International AG
„Little Mouse's Encyclopedia” coming soon on Nintendo Switch, Xbox One and Xbox Series S|X
Statement by the Group #TomekMackiewicz43
Polish Investment Zone: A new dimension in the economic relations between Poland and the USA- The first Polish –American Leadership Summit – Miami February 2018
Better-than-Forecast Performance – PMPG Polskie Media Summarises Its Successful FY 2016
“Biała magia”- the first single in Polish and a holiday video clip by Ola Gintrowska