RedDeer.Games on the list of Top gaming startups in CEE according to the Google for Startups, Atomico, Credo ventures and Dealroom.co report 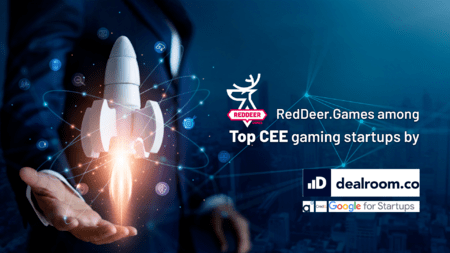 For more inspiring insights, we encourage you to check out Dealroom.co's publications, available on the RedDeer.Games IR profile on the platform Linktree:

“Working with the founders of CEE for the last 10 years, I am impressed by their courage and determination in building global solutions despite the threats they face. This report is a thank you to all the brave founders of CEE from our region who do not give up, who believe in their dreams and want to fight for their implementation.” – comments Joanna Nagadowska, Google for Startups.

By analyzing the in-depth data contained in the above-mentioned report, we are proud to share with you the information that RedDeer.Games studio was distinguished by Dealroom.co, Google for Startups, Atomico and  Credo Ventures as one of the promising Top gaming startups of Central and Eastern Europe

“New technologies that change all sectors of our lives also drive one of the most dynamic industries in the world - gaming industries. Computer games have evolved over the years, focusing mainly on the development of graphics aiming at idealized photorealism. Today, the ecosystem has matured to groundbreaking technological solutions. I am aware that the greatest transformations are yet to come. Taking care of maintaining the positioning of our studio at the forefront of gaming startups in Central and Eastern Europe, my main challenge, like many other industry managers, is to change the current rules of the game and "be ahead of its time", i.e. to assume the role of a "connector" between the Creator of the game and all add-ons and the User, who expects from us technology that will increase his comfort of dealing with virtual entertainment. Together with the key people of RedDeer.Games, we have chosen this direction as a strategic goal for the coming years. We focus on the development of the company and products that provide players with the greatest possible progress." – says Michał M. Lisiecki, Co-Founder & CEO of RedDeer.Games sp. z o.o.

A NEW GENERATION OF TECHNOLOGICAL ECOSYSTEMS

Dealroom.co has also benchmarked 201 global tech hubs to identify mature startup cities that will lead innovation in the next decade. They included their conclusions in the report The next generation of tech ecosystems.

If you can't create a successful startup yourself, you can invest in an existing one and buy yourself a piece of its future success. Smart Investors understand that we have many of them!

Due to the dynamic development of the studio, including the publishing portfolio for the Premium (IP) and AA category license, as well as expansion into foreign markets, the company has been running a roadshow of the Pre-A private investment round since October this year. The current round is addressed to individual investors and Venture Capital funds. RedDeer.Games will offer to interested investors a total of 700 new shares,i.e. 15 percent in its increased share capital.

If you are interested in investing in RedDeer.Games, please contact us directly, and we will answer all additional questions regarding the current Pre-A investment round. According to the adopted schedule, the series of meetings of the Management Board with Investors, both in Warsaw and in selected European cities, will last from October this year to the end of March 2023.

Podobne komunikaty
RedDeer.Games with the award "The fastest growing gamedev company in Central Europe" starts the investment roadshow
RedDeer.Games opens an office in Barcelona. This is one of the emission targets of the Pre-A private investment round. The financial roadshow will continue until May 15, 2022.
Two new titles in the RedDeerGames portfolio
NASA Endeavor STS-49 space mission chief becomes an advisor and investor in RedDeerGames
"Little Mouse's Encyclopedia", on Nintendo Switch, Xbox One and Xbox Series S | X available from April 23, 2021. Pre-sale has just started.
PMPG Polish Media S.A. announces establishment of a company in Switzerland and changes in the Management Board. Katarzyna Gintrowska – appointed a President of the Board of PMPG Polskie Media S.A. Ilona Weiss – appointed a Chairman of the Board, CEO of B-8 International AG
„Little Mouse's Encyclopedia” coming soon on Nintendo Switch, Xbox One and Xbox Series S|X
Statement by the Group #TomekMackiewicz43
Polish Investment Zone: A new dimension in the economic relations between Poland and the USA- The first Polish –American Leadership Summit – Miami February 2018
Better-than-Forecast Performance – PMPG Polskie Media Summarises Its Successful FY 2016
“Biała magia”- the first single in Polish and a holiday video clip by Ola Gintrowska